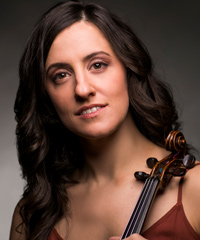 Her latest recording projects include Quartango, an album of tango for string quartet; Latinoamerica, a cd of all Latin-American works and a co-production with Mark Sonksen Vicisitudes. Previous projects include Sonksen’s Postales del Sur and Argentina Tango on Stage, with Carlos Marzan and his ensemble in Buenos Aires, Argentina
Moreira is a member of ProMusica Chamber Orchestra in Columbus, Ohio and concertmistress of Oistrakh Symphony in Chicago. She has performed in the Chicago Latino Music Festival since 2007 has been involved with the Chicago Tango Festival since 2006.

In addition to her membership with the Kaia String Quartet, she has also collaborated with Rush Hour Concerts, Ondas Ensemble, Intersection from Nashville, and the National Chamber Ensemble of Uruguay. She was also winner of the 2010 DePaul Concerto Competition.

Moreira is a faculty member at DePaul University Community Music Division. Some of her education projects include KAIA KIDS, an initiative through WFMT and PBS Kids, tango workshops at Old Town School of Folk Music and outreach concerts through Ravinia, Evanston in School Music Association, and Promotora de las Bellas Artes in Mexico.
Moreira studied at Escuela Universitaria de Musica, Montevideo Uruguay under Jorge Risi, received her Bachelor of Music at Roosevelt University under Vadim Gluzman and her Master of Music and Artist Certificate at DePaul University under Ilya Kaler. She also did a residency at Northern Illinois University with the KAIA String Quartet under the tutelage of the Avalon String Quartet.