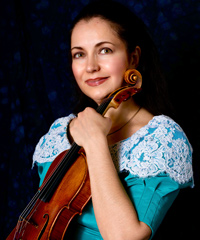 Praised by critics for her “deep, soulful sound” and “powerful and enchanting renditions” Olga Dubossarskaya Kaler toured three continents as a soloist, chamber and orchestral musician. Currently a violin professor at DePaul University School of Music in Chicago, Kaler is chosen to join the distinguished violin faculty of the Cleveland Institute of Music in the fall of 2018.

Kaler holds Doctoral degree from the Northwestern University. Her previous degrees are from the New England Conservatory of Boston, the Moscow State Conservatory and the Stolyarsky Special Music School in Odessa.

Kaler was awarded the Special Prize at the Rodolfo Lipitzer International Competition in Italy, and the First Prizes at both the Northwestern and Thaviu-Isaacs Competitions. Currently a member of the World Orchestra for Peace under the direction of Valery Gergiev, the Chautauqua Symphony Orchestra of NY and the Chicago Ensemble, she appeared at music festivals throughout Europe and USA. Kaler performed at the world’s legendary concert venues, including Carnegie Hall, Moscow Conservatory Great Hall, Royal Albert Hall, and the Berlin Philharmonie, to name a few.

Described as “THE BOOK” and “the Bible for Violinists” by the leading US pedagogues,         Dr. Kaler’s Scale System for Reluctant Scale Enthusiasts met with enthusiastic reception from string players around the world. She is currently in preparing the viola and cello versions of the book. The Scale System is adapted into curriculums of conservatories around the world, along with Kaler’s acclaimed method book, An Effective Method for Teaching and Studying Violin Technique.