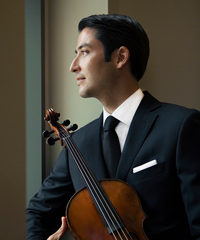 Grammy Award-winning Japanese-Norwegian violist Masumi Per Rostad has been described as an “electrifying, poetic and sensitive musician” with an “understated yet commanding presence” by critics and is in demand as a soloist, chamber musician, and teacher. In 2017 he was appointed to the faculty of the celebrated Eastman School of Music in Rochester, NY.

Masumi’s chamber music collaborations have includes programs with the St Lawrence, Ying, Pavel Haas, Verona, and Emerson Quartets. He has toured extensively as a former member of the International Sejong Soloists. He has recorded for Cedille Records, Naxos, Hyperion, Bridge and Tzadik. He now regularly performs piano quartets as a guest with the Horszowski Trio.

As a former member of the Pacifica Quartet from 2001-2017 Masumi was full professor of viola and chamber music at Indiana University. In 2006 the ensemble was named Musical America’s 2009 Ensemble of the Year. The quartet was ensemble-in-residence at the Metropolitan Museum of Art from 2009-12.

He received his Bachelor and Master of Music degrees from The Juilliard School. There, he studied with legendary violist and pedagogue Karen Tuttle from the age of 17 and was appointed her teaching assistant just three years later at the age of 20. At Juilliard he won The Juilliard School Concerto Competition and performed the world premiere of Michael White’s Viola Concerto in Lincoln Center’s Avery Fisher Hall, with conductor James DePreist. That same year he gave the New York premiere of Paul Schoenfield’s Viola Concerto with the Juilliard Symphony to critical acclaim.

Currently, Masumi lives in Rochester, NY with his wife Sonia, a concert pianist. He is professor of viola and chamber music at Eastman School of Music. His Fratelli (Brothers) Amati viola was crafted in Cremona, Italy in 1619.