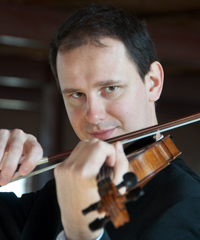 Critically acclaimed violinist Dmitri Pogorelov has won prestigious chamber music competitions in his native Russia at an early age, which led to numerous appearances in chamber music recitals and solo performances with orchestras in the USA, across Western Europe, Japan, South Africa, and Russia. As first violinist with the Kontras String Quartet, Dmitri has performed across the United States, as well as on CBS, NBC, NPR, WFMT, and WBEZ.