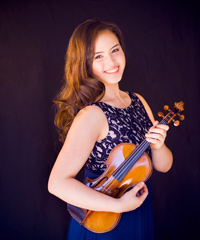 Twenty-year old violinist Alina Kobialka has been praised as a remarkable young soloist due to her beautiful tone, effortless precision, and musical maturity beyond her years. At the age of 14, she made her solo debut with the San Francisco Symphony at their 100th Anniversary Reunion Concert in Davies Symphony Hall, and was featured live on the nationally acclaimed radio show NPR’s From the Top.  Not long after, she toured with the San Francisco Symphony Youth Orchestra throughout Europe, performing in some of the continent’s most prestigious halls, including the Berlin Philharmonie.

In 2014, Alina made her debuts with the Las Vegas Philharmonic and the Kagawa International Youth Orchestra in Japan, and was also invited back for her second solo appearance with the San Francisco Symphony. She began 2015 in Asia, where she performed with the Macau Youth Symphony for their New Years’ Concert.

Recently, Alina Kobialka returned for her third solo appearance with the San Francisco Symphony.  She was also awarded second prize at the 2017 inaugural Elmar Oliveira International Violin Competition, where she was the youngest competitor. Last summer, Alina was an artist at the Marlboro Music Festival.

The San Francisco Classical Voice describes Ms. Kobialka as a “jaw-droppingly assured” soloist, who “made present and future converge.” The Las Vegas Review Journal writes, “Watch for her name.  She appears to be bound for greatness.” She has been featured on the television shows “Vegas Morning Blend” on ABC, and the Macau Morning Show.