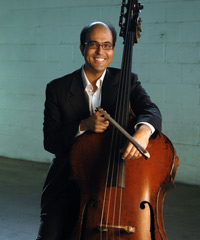 An Artist Member with the Chamber Music Society of Lincoln Center, Kurt Muroki began his musical studies on the violin at the age of six and subsequently performed concerti with the Honolulu Symphony and the Maui Symphony. Mr. Muroki went on to study the Double bass at the age of 13 and entered the Juilliard School of Music at 17 studying with his teacher / mentor Homer R. Mensch.

Mr. Muroki is currently faculty/teaches at the Indiana University’s Jacobs School of Music, the Bowdoin International Music Festival, the New York String Orchestra Seminar, and has been a judge at the Yale Gordon Competition at Peabody Conservatory, ASTA, and others. Mr Muroki is also on the Board of Directors of the International Society of Bassists and is a D’Addario Strings Artist.

Kurt plays on a double bass once owned by the famous double bassist Domenico Dragonetti and attributed to Nicolo Amati circa 1665.