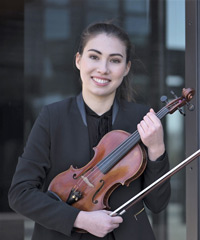 Lalita Svete, born 1996 in Vienna/Austria, has received her first violin lessons at the age of four at the Music School in Maribor, Slovenia and is currently studying with Boris Brovtsyn at the Musik und Kunst Privatuniversität in Vienna. Prior to that, she has taken lessons with Arkadij Winokurow and Lidia Baich. She made her first debut as a soloist at the age of seven and has continued giving concerts in Austria (Wiener Konzerthaus, Musikverein Wien), Slovenia (Ljubljana „Slovenian Philharmonic“ and „Cankarjev Dom“, Maribor „Summerfestival Lent“), Italy (Venice „Teatro La Fenice“, „Teatro Malibran“) and the USA. Ms. Svete has recently performed with orchestras such as the Slovenian Radio Symphonic Orchestra (2016) under the baton of En Shao and the Kiev Camerata (2017) with Valeriy Matyukhin. In 2007 Lalita Svete toured with the “Zagreb Soloists” in Croatia, Liechtenstein, Austria and Slovenia through the foundation “Stiftung Musik & Jugend”.