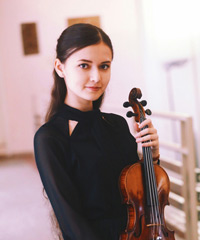 Born in 1999, Anastasia Farrakhova received her first violin lessons at the early age of 5. In 2006 she entered Special Music School of the St. Petersburg Conservatory studying with Tatiana Prasnikova. Graduating in 2017, Anastasia continued her education at the Rimsky-Korsakov St.Petersburg State Conservatory in the studio of People’s Artist of Russia, Professor Mikhail Gantvarg.

Anastasia performs regularly in as soloist, chamber musician and member of important orchestras in Russia and abroad. She has taken part is such festivals as Kissinger Sommer, Verbier Festival, Muzikale Oktober Best in Netherlands. In 2017 she participated in the jubilee tour of the Gustav Mahler Youth Orchestra. Ms. Farrakhova has appeared at the Grand Hall of Moscow Conservatory, Halls of St. Petersburg Philharmonic and Conservatory, the Grand Hall of Beloselsky-Belozersky Palace, as well as concert halls of Vienna, Zurich, Florence, Prague, Geneva, Berlin and Munich. In recent years she has regularly appeared as soloist with “Klassika” Orchestra under the baton of Alexander Kantorow and Northern Sinfonietta under Fabio Mastrangelo.

Ms. Farrakhova has participated in masterclasses of Maxim Vengerov, Antal Zalai, Grigory Kalinovsky and Vadim Gluzman and is the 2018 recipient of Arkady Fomin Scholarship Fund.