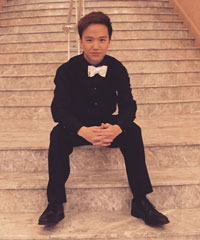 16 year old Korean-American cellist Stephen Chang privately studies with Michael Coren. Stephen began to study the cello at the age of 8 and has studied with prominent cellists Jung-Shin Lewis and Ko Iwasaki. Since the age of 12, Stephen competed in local and state competitions winning top prizes and soon made his orchestral debut with the Fort Worth Civic Orchestra. As a chamber musician, Stephen has worked with pianists Daniel Shapiro and Timothy Ehlen, as well as the members of Trio Fugu. Additionally, he has also had the opportunity to play for Jesus Castro-Balbi and Yuri Anshelevich in various masterclasses. In past summers, Stephen has attended the Institute for Strings in Dallas and the Montecito International Music Festival.