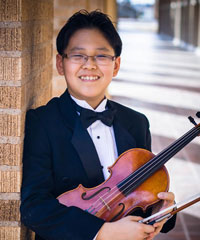 Daniel Bae, 13, from Lubbock, TX, began his musical journey with piano at the age of 4, followed by violin at the age of 5. Currently, he is a student of internationally renowned violinist and teacher, Mr. Emanuel Borok, Violin Professor at Southern Methodist University and Former Concertmaster of Dallas Symphony Orchestra. Previously, he studied with Annie Chalex Boyle, Assistant Professor at Texas Tech University and Adrian Walker, private violin teacher and former member of St. Louis Symphony Orchestra

Daniel’s performance was commended by many audiences that he already exhibits a very distinct personality and musical maturity with his technical ability and captivating way of communicating with the audiences. In the most recent solo performance with an orchestra, the conductor commented that Daniel’s rendition of Tzigane was full of fireworks and it’s not something to be missed.

In addition to his solo performances, Daniel is currently holding the Co-Concertmaster position of the Symphony Orchestra of YOL (the highest group of the YOL orchestras) and has been the concertmaster of the Middle School All Region Orchestra (Region 16) since 2014.

Beside music, Daniel likes swimming, being a member of Lubbock Swim Team for 5 years and he currently holds five team records. He also like playing video games on Xbox, listening to music and watching movies.