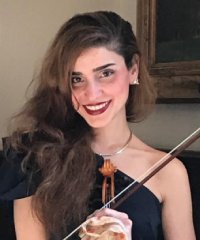 Negar (Dena) Afazel, was born in Tehran, Iran to a family of music lovers. She started playing Violin at the age of 8 and got accepted into the Tehran Music Conservatory at the age of 10. She grew up listening and learning different genres of music which were always playing in her house, from Pergolesi and Bach, to Jazz, Blues, and Persian traditional music.

Negar has been inspired by Persian traditional music and how it impacts people. Persian music has strong roots in social events boiling in the society and it is a music for the people, who are unable to scream out with their voices; it acts as their voice, and has a strong relation to deep and unique Persian poetry. This tradition and culture has impacted her and her missions through her career: to be a musician means making changes around us, creating new paths and points of views among people, and getting people together through this amazing gift of humanity and honoring it.

Negar is a current DMA student at Peabody Conservatory and is interested in traveling and playing music with different people from different cultures, and connecting to their cultures through this collaboration. Alongside classical music, she is a very diverse musician who has collaborated with jazz and tango ensembles, new music composers, and local hip-hop band Last Gasp Collective. She has formed two chamber groups during her Masters’ study at Western Michigan University: Quartet du Monde (first violinist) and Atlas Trio. With Quartet du Monde, she had the chance of giving the world premiere of Judith Zaimont’s second string quartet (2018). Negar has performed in many places such as Iran, Turkey, Germany, Italy and the US, and had the chance to perform at the Orfeo Music Festival, Montecito Music Festival, SPLICE Festival, and Electronic Music Midwest festival.

Negar has served as the concertmasters for orchestras at WMU and during her study in Tehran. Her ensemble “Trio Nomah” was the second prize winner of FAJR International Music Festival in Tehran (No first prize awarded, 2010) and the first prize winner of Tehran Music Biennial (Junior division 2006 & 2010). She received the honorable mention for performing “Tzigane”  from WMU Concerto Competition (2018) and performed Tchaikovsky’s Violin Concerto in D major with the WMU University Symphony Orchestra, after winning the annual concerto competition (2019). She is a former Kalamazoo Symphony Orchestra Artist Scholar (2017-2019).

Besides musical activities, she has been collaborating with the Children Book Council of Iran, under supervision of IBBY. Negar is also interested in painting during her personal free time and has won Shankar’s International Children’s Competition award (India, 2006) and gold medal of the 3rd International Children’s Art competition (Tehran, 2005).

When she is not playing her violin, she is reading, painting, running or baking bread!