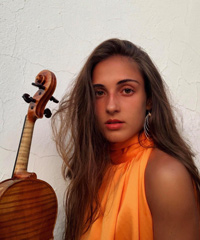 Marina Alba López was born in Madrid in 2001 in a family of musicians and started to play the violin at the age of 7. Her musical training began with singing, when she joined Madrid’s Community’s choir at the age of 5 -with whom she performed several operas at the Royal Theater of Madrid such as Tosca, Kröl Roger, Boris Godunov and Der Rosenkavalier.

She studied with Anna Baget in Adolfo Salazar Conservatory, where she finished her professional studies at the age of 16 with Honors and was awarded with the ‘Adolfo Salazar Extraordinary End of Studies Prize’.During the years of 2018-2020 she studied with Jesús Reina and Anna Margrethe Nilsen at the Galamian International Academy of Music (AIG).

She is currently a Sophomore at the IU Jacobs School of Music, where she studies with the world-renowned pedagogue and soloist Grigory Kalinovsky. At JsoM she is a member of the newly formed Morisot Quartet, with whom she is part of the Advanced Chamber Seminar -conducted by the Pacifica Quartet.

At IU JsoM she holds the Young Premier Artist Scholarship and the E H Claus Scholarship. Thanks to her excellent academic achievements she is also the recipient of Madrid’s Community Overseas-studies Grant, and is a member of the exclusive Hutton Honors College. Besides, her studies at IU JsoM are also financially supported by two private sponsors, Jacques and Brigitte Bauzon.

As a young talent and artist, Marina has been supported by the Arkady Fomin Fundation, Aeterna Musica Foundation, Piu Mosso Foundation, IU Jacobs School of Music and Fundación Reina Nilsen.

In September 2020 she performed as guest artist at the Chamber Festival Málaga Clásica, where she shared stage with artists such as Koh Cameda, Jesús Reina, Gabriel Ureña, Óscar Martín, Josu de Solaun or Erzhan Kulibaev.

She is an active supporter of new music and has premiered several pieces such as „Pirueta y Perspectiva”(2019) by Javier López de Guereña, „Obra para orquesta de cuerda” (2020) by Fernando Arroyo Lascurrain and “A memory among the fog” (2015) by Alejandro Gwinn. In March of this year she premiered with her quartet, „Rats don‘t pay subway fare“ (2022) by Matthew Levin.

Marina Alba is also a Jazz vocalist. She sings a wide range of styles within this genre, including brazilian Bossa Nova and latin Salsa. She is building up her vocalist career at the Jacobs School of Music where she is the lead singer of Wayne Wallace’s Latin Jazz Ensemble.