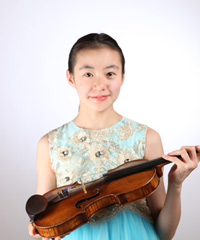 Born in New York City, fourteen-year-old Fiona studies the violin with Professor Li Lin, Kenneth Renshaw, and Stella Chen in the Juilliard Pre-College division. Recently awarded the prestigious career grant award from Salon De Virtuosi, Fiona has performed at Merkin Hall for Salon De Virtuosi’s 2020 Gala, and with her sister Hina at Alice Tully Hall for Juilliard’s Pre-College Centennial Gala, the Bozar Concert Hall in Brussels for Musica Mundi’s 20th Anniversary Gala, and at Buckingham Palace with Maestros Maxim Vengerov and Marios Papadopoulos. She received the first prize at the 2017 Grumiaux competition, and the third prize and the best virtuoso interpretation prize at the Louis Spohr Competition in 2019. Fiona has made solo performances with the Mitteleuropa orchestra at “Il Piccolo Violino Magico” in San Vito al Tagliamento, Italy and the Flanders Symphony Orchestra in Belgium. Most recently, she played at the Bouchaine Vineyard as part of the Napa Valley Festival, and has also participated in the Musica Munda Festival in Belgium and Keshet Eilon Mastercourse during the summer where she has taken masterclasses and lessons from Vadim Gluzman, Maxim Vengerov, Ilya Kaler, Menahem Pressler, Ivry Gitlis, and more. She attends the Spence School in New York.