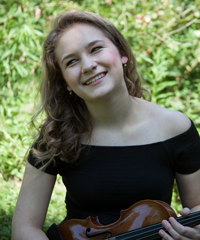 “While it is not out of the ordinary for me to come across immensely and precociously talented youngsters as host of “From the Top,” it is quite a rarity to be introduced to a very young artist who displays not only incredible facility but the truest manifestations of artistry: devotion and dedication, a personal and rigorously integral aesthetic point of view, and the requisite leadership and responsibility for inspiring her peers. Masha Lakisova is just such a rarity, a true artist destined for great things.”

Christopher O’Riley, Host, NPR’s “From the Top”
At just nineteen, Chicago violinist Masha Lakisova is fast becoming one of the rising stars of her generation. She has had the privilege of performing in esteemed concert venues in the United States and all over the world. Masha has appeared as a soloist with orchestras worldwide such as Kremerata Baltica, HEMU, Fox Valley Symphony Orchestra, Skokie Valley Symphony Orchestra, and Lake Forest Symphony. At the North Shore Chamber Music Festival, she became the first recipient of the Arkady Fomin Scholarship in 2015. She was featured on NPR’s “From The Top” four times, where she received the Jack Kent Cooke Young Artist Award, and on WFMT’s Introductions, both as a soloist and as a member of various chamber groups.

Masha currently studies with Miriam Fried at New England Conservatory, where she is a recipient of the Dean’s Scholarship. She graduated from Julliard Pre-College where she studied with Itzhak Perlman and Li Lin, and she has also previously been a student of Grigory Kalinovsky, Drew Lecher, and Larisa Zhizhin. Masha has taken lessons and masterclasses with such prominent virtuosi as Ana Chumachenko, Anne Sophie Mutter, Pinchas Zukerman, Shmuel Ashkenasi, Paul Huang, Augustin Hadelich, and Ida Kavafian. She has collaborated with Vadim Gluzman, Pavel Vernikov, Svetlin Roussev, Ilya Kaler, Yossif Ivanov, Masumi Per Rostad, Rose Armbrust Griffin, Ani Aznavoorian, Mark Kosower, Christopher O’Riley, David Schrader, and the Ariel Quartet.

Masha has been involved with many prestigious summer music festivals. In 2015, she attended the Heifetz Music Institute and has been a student at the Perlman Music Program since 2016.

Miss Lakisova is the proud recipient of a magnificent violin by Giovanni Francesco Pressenda, Turin, 1845 on loan from The Stradivari Society of Chicago thanks to the generosity of her patron, Edward Manzo.