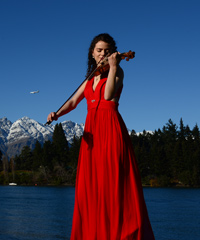 At the age of 14, Jacqueline made her solo debut with the Meridian Symphony after winning their young artist competition. In recent years, she has appeared as a soloist with the Shepherd School of Music Symphony Orchestra, the Texas Medical Center Orchestra, the Boise Philharmonic, the Music in the Mountains Festival Orchestra, the McCall Summerfest Orchestra, and the Walla Walla Symphony. Audas has collaborated with a number of conductors including Guillermo Figueroa, Robert Franz, Yaakov Bergman, and Libi Lebel.

She has performed in masterclasses for Vadim Gluzman, Ivry Gitlis, Chaim Taub, Ida Kavafian, Grigory Kalinovsky, Arnold Steinhardt, Sergey Ostrovsky and Rachel Barton Pine, among others.  She attended the Keshet Eilon Mastercourse in Israel in 2015 and 2017, the Sommermusik im Oberen Nagoldtal in Germany in 2017, and the Aspen Music Festival in 2016 and 2018.

In 2017 she was awarded a scholarship from the Arkady Fomin Scholarship Fund.