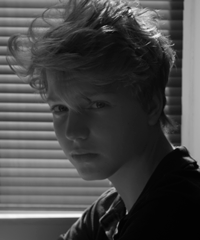 Young filmmaker Leo Sinaiski was born in 2001 in St. Petersburg, Russia, into a family of highly respected musicians.

Leo began his artistic activities and education at Marina Landa Children Music Theater in St. Petersburg and moved to Vienna with his family in 2010.  He has participated in master classes and the Vienna Children Theater, First Film Academy, as well as Youth Film Camp in Arendsee, Germany (directing, camera and editing). In Vienna Leo studies privately with noted Director and Producer Piotr Szalsza and enjoys regular encounters with such great artists as Marco Borggreve, Thomas Wildner and Thomas Benesch.

Leo has shown interest in photography and filmmaking since the age of 10, and has already more than 20 short films, promotion and demo videos to his credit. In 2013 his short film „Life for Art – Amsterdam“ was the first prize winner at the Creative Contest “Next Generation’s Mobility” in Vienna, Austria, and another short feature „Lost in Dreams“ won the same competition in 2014. Also in 2014 one of his short films was nominated for the Camgaroo Award in Munich, Germany.