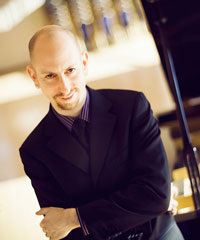 Adam Neiman is hailed as one of the premiere pianists of his generation, praised for possessing a truly rare blend of power, bravura, imagination, sensitivity, and technical precision. With an established international career and an encyclopedic repertoire that spans more than sixty concerti, Neiman has performed as soloist with the symphony orchestras of Belgrade, Chicago, Cincinnati, Dallas, Detroit, Houston, Indianapolis, Minnesota, Saint Louis, San Francisco, Slovenia, Umbria, and Utah, as well as with the New York Chamber Symphony and the National Symphony Orchestra of Washington D.C. He has collaborated with many of the world’s celebrated conductors, including Jiri Belohlavek, Giancarlo Guerrero, Theodor Gushlbauer, Carlos Kalmer, Uros Lajovic, Yoël Levi, Andrew Litton, Rossen Milanov, Heichiro Ohyama, Peter Oundjian, Leonard Slatkin, and Emmanuel Villaume.

An acclaimed recitalist, Neiman has performed in most of the major cities and concert halls throughout the United States and Canada. His European solo engagements have brought him to Italy, France, Germany, the United Kingdom, and Japan, where he made an eight-city tour culminating in his debut at Tokyo’s Suntory Hall.

In 1999, his work as a composer came to the attention of critics with the world premiere of his piano trio, “Mirror and Fugue,” performed at the Seattle Chamber Music Festival. Seattle Weekly called it “daringly sparing in texture.”

Recent world premieres include his first String Quartet, commissioned and performed by the Seattle Chamber Music Society; Concerto for Piano & String Orchestra, commissioned by the Manchester Chamber Orchestra and premiered on tour throughout New York and New England; Serenade for Violin & Piano, premiered throughout Los Angeles and Santa Barbara by Camerata Pacifica; and Two Elegies for Clarinet & Piano, premiered at the Seattle Chamber Society with subsequent performances at Poisson Rouge in New York and the Festival Cervantinos in Mexico.

Recent and upcoming performances of his works include performances of his Concerto for Piano & String Orchestra in Las Vegas; a tour with Maria Bachmann throughout South Carolina and Connecticut performing his Serenade for Violin & Piano; and performances of his String Quartet by Camerata Pacifica. Neiman continually promotes his solo piano music through his recitals across the globe.