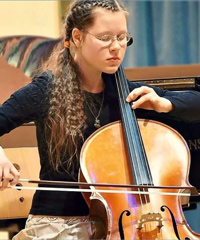 Cellist Ekaterina Ivanova-Martynova was born in 1999 in Moscow. She began her cello studies at the age of four at the E.Svetlanov Music School with Ekaterina Polivanova and later with Olga Galochkina at the S.Taneev Music School in Moscow. Currently Ekaterina is studying Bachelor of Music Program at the Cleveland Institute of Music with Professor Mark Kosower.

In 2016 her recordings with pianist Alexey Kirillov were represented for European Broadcast Union  by Radio Orpheus. The repertoire for this program included works by L.Boccherini, S.Prokofiev, A.Dvorak, B.Martinu, E.Bloch and M.Rostropovich.

Twice she has been selected as a scholar of the New Names Foundation (2008, 2012). Apart from playing cello Ekaterina composes music and makes transcriptions for cello and cello ensembles.