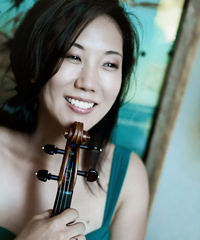 Violinist Lisa Shihoten enjoys an active career as a chamber musician, recitalist, and teacher. She made her New York solo debut at Avery Fisher Hall under the direction of Kurt Masur, and has received top prizes and awards from the National Foundation for Advancement in the Arts, the Marcia Polayes National Competition, and the Seventeen Magazine/General Motors National Competition.