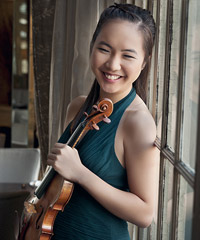 Recently selected as one of eight young artists to join Chamber Music Society Two of Lincoln Center, violinist Danbi Um has appeared as soloist with the Israel Symphony, Vermont Symphony, Herzliya Chamber Symphony, Auckland Philharmonic, and Dartmouth Symphony, among others, and in such venues as the Kennedy Center for the Performing Arts, Philadelphia’s Kimmel Center for the Performing Arts, Boston’s Isabella Stewart Gardner Museum, Seoul’s Kumho Arts Hall, the Tel Aviv Museum of Art, and for the Seattle Chamber Music Society and Ravinia Festival. She is a winner of Astral’s 2015 National Auditions. Upcoming, she appears with CMS Two in Lincoln Center’s Alice Tully Hall, at Saratoga Springs, and in many other national and international concert venues. She will also participate in the Music@Menlo Festival and tour with “Musicians from Marlboro.”

The Second Prize winner of the 2004 Yehudi Menuhin International Violin Competition, Ms. Um also won Third Prize at the Michael Hill International Violin Competition in 2009. At age ten, she was admitted to the Curtis Institute of Music, where she graduated with a Bachelor of Music degree. She also holds an Artist Diploma from Indiana University. Ms. Um’s teachers have included Shmuel Ashkenasi, Joseph Silverstein, Jaime Laredo, and Hagai Shaham.

Danbi Um plays on a 1683 “ex-Petschek” Nicolo Amati violin, on loan from the collection of Seth Novatt.