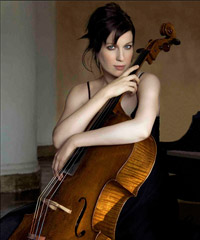 Previn, Jesús López-Cobos, Joel Smirnoff, Carlos Miguel Prieto, Ignat Solzhenitsyn, Charles Dutoit, Eiji Oue, Neeme Järvi and Michael Tilson Thomas.WendyWarner has recorded for the Cedille, Bridge and Noxos record labels. Her most recent recordings include a Cd of works by Popper and Piatigorsky, Rachmaninov and Myaskovsky Sonatas and a cd devoted to unknown Beethoven piano trios, including a world premiere, all on the Cedille Records label. A recipient of the prestigious Avery Fisher Career Grant, Wendy Warner’s musical career began at age six. She studied with Nell Novak until she joined Mstislav Rostropovich at the Curtis Institute, from which she graduated. In addition to her performance career, Warner is on the faculty at the Schwob School of Music at Columbus State University in Georgia. She uses a cello bow by Francoix Xavier Tourte of Paris, c. 1815, the “De Lamare”, on extended loan through the generous efforts of the Stradivari Society of Chicago.