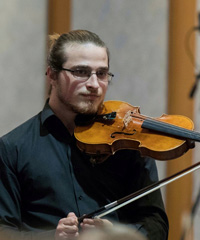 Andrey Egorov born in 1998 in Riga, Latvia, began studying the violin at age 7. He entered Jāzeps Mediņš music school in 2006 studying with Dagmāra Ķezbere. From 2013 to 2018 he studied in Emīls Darziņš music school under Nelli Sarkisyan. Since 2018 he is studying at the Jāzeps Vītols Latvian Academy of Music under Terēze Zīberte-Ijaba and Georg Sarkisyan.

Andrey regulary performs with different orchestras, for example, with Emīls Dārziņs music school orchestra (as a concertmaster) in Great Guild Hall in Riga and in Malta, Latvian National Symphony orchestra, Sinfonia Concertante. He regulary performs also as soloist and had his solo concert in 2018 in Velikiye Luki, Russia, performed as soloist in Barocksaal in Rostock, Germany and also as soloist with Latvian National Symphony orchestra in 2017. In 2018 he has taken part in project ‘’Side by side’’ and performed with Royal Concertgebouw Orchestra (in first violins alongside with concertmaster).