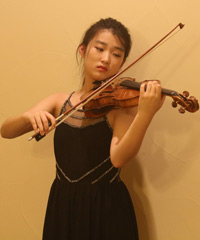 Kaeon Cho, 15, began studying the violin at the age of seven with Jina Lee Aleman, and has played for Jan Mark Sloman, Alex Kerr, Kim Chee Yun, Paul Kantor, Miriam Fried, and Vadim Gluzman. Currently, she studies under Dr. Pasha Sabouri. At the age of 10, she was accepted into the Greater Dallas Youth Orchestra under Rick Giangiulio and became the youngest member ever in the history of the organization to be invited. She also won prizes at the Collin County Young Artist Competition since she was 9 years old for three years consecutively, receiving first prize in 2016. She has also captured the top prizes since she was a 3rd grader in the Dallas Music Teacher’s Association Concerto Competition, recently achieving 1st place in 2017. In November, 2015 she received Honorable Mention in the highly competitive Music Teachers National Association, and in the year of 2016 and 2017, she was selected as a semifinalist for the Fort Worth Competition. Aside from practicing and performing in competitions, Kaeon also leads a quartet, which has won first prize in Voices of Change’s first ensemble competition, and is part of a trio, which has also won first prize in the GDYO chamber ensemble competition this year.