J.S.Bach
Largo & Allegro assai from Sonata for violin solo No.3 in C major 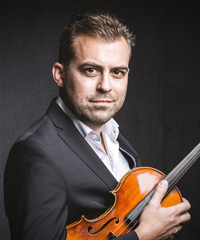 One of the leading German violinists of his generation, Friedemann Eichhorn is a regular guest on concert stages around the world. Highlights for the 2021-22 season include concerts with the Konzerthausorchester Berlin and the Hong Kong Philharmonic under the baton of Christoph Eschenbach and with the Orchestra di Santa Cecilia di Roma under Antonio Pappano, CD recordings with the Deutsche Radio-Philharmonie under Valentin Uryupin, as well as tours to USA, China and Korea. In past seasons Friedemann has collaborated with the SWR Radio Orchestra, Deutsche Staatsphilharmonie, St. Petersburg Philharmonic, Hamburger Symphoniker, Rheinische Philharmonie, Bangkok Symphony and the Korean Chamber Orchestra and others. A longtime recording artist for Naxos and Hanssler classic Friedemann has recorded 20 violin concertos and lots of duo and chamber music repertoire on more than 30 CDs. His recent album of Fazil Say’s complete violin works (Naxos), recorded together with the composer, the Deutsche Radio-Philharmonie and Christoph Eschenbach, has received many distinctions and was featured with rave critical acclaim. As a chamber musician Friedemann has collaborated with Gidon Kremer and Yuri Bashmet, as a soloist with the late Yehudi Menuhin. Friedemann Eichhorn lives in Weimar, Germany and enjoys teaching some selected students as a professor at the University of Music Franz Liszt. Among his class and alumni are many prize winners of prestigious international competitions and members of the Berlin Philharmonic, Deutsche Oper am Rhein and many radio orchestras, among them several concertmasters and violin professors. Friedemann Eichhorn is artistic director of the Kronberg Academy and has studied with Valery Gradow in Mannheim, Alberto Lysy at the Menuhin Academy in Switzerland and with Margaret Pardee at the Juilliard School New York. He was awarded a PhD in musicology at the University of Mainz.