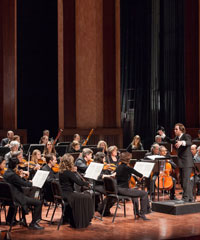 Founded in 1978, ProMusica Chamber Orchestra has sustained over three decades of world-class performances, impacted the community through education and outreach programs, and drawn national attention to the Columbus arts scene through innovation and musical merit. Music Director David Danzmayr is in his third season with the orchestra, and renowned violinist Vadim Gluzman holds the post of Creative Partner & Principal Guest Artist.

Comprised of 37 musicians, ProMusica [Chamber Orchestra] presents its subscription concerts as the resident orchestra of the historic Southern Theatre in downtown Columbus, and performs at other selected venues in the greater Columbus metropolitan area. The orchestra presents a Summer Music Series each August, free and open to the public in collaboration with venues such as Franklin Park Conservatory, and The Topiary Park at the Columbus Metropolitan Library.

With a deep commitment to education, ProMusica’s arts outreach programs influence thousands every season. Musicians travel to local schools, senior citizens are engaged in live rehearsals, and at-risk children are invited to learn, play, and explore with the orchestra. Programs such as Play Us Forward and Musicians in the Schools offer in-school based curriculum, while free family concerts in partnership with the Columbus Metropolitan Library offer accessible musical experiences in nurturing neighborhood environments. The CODA: Post-concert Conversations offer exclusive dialogue between audiences and guest artists, deepening engagement of the concert experience. Co-founded by Richard Early and Timothy Russell, Dr. Russell led the orchestra as music director for 34 years, stepping down from the podium in 2013.

The orchestra has won eight awards from the American Society of Composers, Authors, and Publishers (ASCAP) for Adventurous Programming and has received various additional awards, including those from the Greater Columbus Arts Council and the Columbus Jewish Foundation. In June 2015, ProMusica was selected as one of the first recipients of The Columbus Performing Arts Prize, a unique award designed to celebrate and support the exceptional artistic directors of Columbus’ performing arts organizations and their aspirations for creative growth.