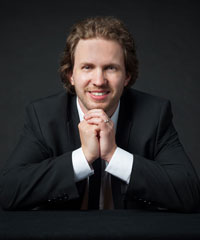 Austrian conductor David Danzmayr is widely regarded as one of the most talented and exciting European conductors of his generation. Danzmayr is the new Chief Conductor of the Zagreb Philharmonic Orchestra and has already lead the orchestra in a highly successful tour to the Salzburg Festspielhaus where they performed the prestigious New Year’s concert and were immediately reinvited to perform in future seasons.

David is also Music Director of the ProMusica Chamber Orchestra, where his contract was recently extended, and serves as the Artistic Advisor of the Breckenridge Music Festval.

Previously David Danzmayr served as Music Director of the Illinois Philharmonic Orchestra in Chicago, where he was lauded regularly by both the Chicago Tribune and Chicago Classical Review for his programming of American composers as well as the quality of performances he and the orchestra achieved together.

Besides numerous reinvitations, future engagements will include concerts with the Milwaukee Symphony, Pacific Symphony, Colorado Symphony, Essener Philharmoniker and Hamburger Symphoniker. David frequently appears in the major concert halls around the globe, such as the Musikverein and Konzerthaus in Vienna, Grosses Festspielhaus Salzburg, Usher Hall Edinburgh and the Symphony Hall in Chicago.

Early in his career Mr. Danzmayr has served as Assistant Conductor of the Royal Scottish National Orchestra, which he conducted in more than 70 concerts, performing in all the major Scottish concert halls and in the prestigious St Magnus Festival.

David Danzmayr received his musical training at the Mozarteum University in Salzburg where he studied conducting with Dennis Russell Davies. As the conducting apprentice of the Gustav Mahler Youth Orchestra, David’s influences were Pierre Boulez and Claudio Abbado. He also studied with Leif Segerstam during his additional studies at the Sibelius Academy. Subsequently he gained significant experience as assistant to Neeme Järvi, Stephane Deneve, Carlos Kalmar and Sir Andrew Davies.