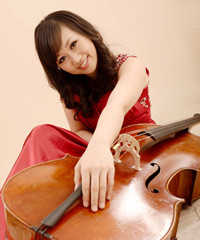 Mingyao Zhao, a cellist from China, started to play cello at the age of 5. Mingyao studied with several prominent teachers, including Mula Na at the Central Conservatory of Music, Jesus Castro-Balbi at Texas Christian University and Aldo Parisot at Yale University School of Music. Most recently, she has been pursuing Professional Studies Diploma at Cleveland Institute of Music in the studio of Mark Kosower, principal cellist of the Cleveland Orchestra.

Mingyao Zhao has performed extensively as soloist and recitalist in her native China, US, Canada, South Korea and Poland.

Winner of numerous prizes, Mingyao was awarded First Prize at Fort Worth Cellofest, Aldo Parisot Award, Silver Medal at the Texas Young Artist Music Competition, Second Prize at the Aiqin Bei International Cello Competition, and is winner of Cleveland Institute of Music Concerto Competition. She has participated masterclasses with David Geringas, Lynn Harrell, Bernard Greenhouse and Ralph Kirshbaum. As a chamber musician Mingyao was inspired by such luminaries as Peter Oundjian, Peter Frankl and members of Brentano Quartet.