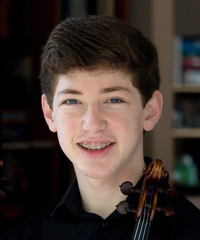 Michael was born in Israel in 2003 and has been playing the violin from age 6.  He studies with his father Prof. Hagai Shaham  and Dr. Guy Figer at the Israel Music Conservatory in Tel Aviv.

Since he was 9 years old, Michael has played with several orchestras including the Israel Symphony Orchestra, Israel Chamber Orchestra, and the Raanana Youth Symphony. In June 2105 Michael was invited to perform at the prestigious ‘Stars of Tomorrow – Young International Talents Concerts’  in Austria and at the ‘Crans-Montana Classics’ Festival in Switzerland by invitation of Maestro Shlomo Mintz. He has also performed at the Closing Gala Concert of the 2017 International Summer Academy Festival of the Vienna Music Academy. In 2016 he performed in the 20th Anniversary Gala Concert of the HEIFETZ INSTITUTE.

Since 2010, Michael participates and performs at the Keshet Eilon International Mastercourse as well as in the Chamber-Music and Young Gifted Violinists Programs of the Jerusalem Music Centre. In 2018 he was named a recipient of the Arkady Fomin Scholarship Fund. In 2015 Michael attended the Summer Strings Academy at Indiana University in Bloomington, Indiana, USA.  In 2016 he participated in the Perlman Music Program in Tel Aviv and in 2017 he was one of 5 young musicians chosen by Maestro Itzhak Perlman to join the International Perlman Program in the Hamptons.  In 2016 Michael was the youngest participant in the Heifetz Institute International Course.