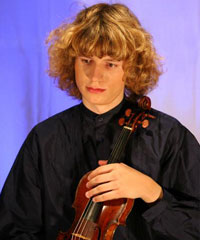 Maximilian Hörmeyer was born in 1989 and started playing the violin at the age of four. In 1995 he attended the Conservatory of Wintherthur (CH). In 1998 he
continued his studies at the University „Hochschule für Musik und Darstellende Kunst“ in Vienna (Austria) as a student in the class of Marina Sorokova. In the years 2010-2012 he studied at the Musikhochschule in Munich with Christoph Poppen, and continued his studies with Professor Zakhar Bron at ZHdK Zurich, graduating with Masters Degree in 2015. Presently he is finishing his Master-Studies in Chamber Music with Evgueni Sinaiski at the Folkwang University in Germany.
Maximilian is the 1st prize laureate of German Competition „Jugend musiziert“ as a solo-violinist as well as in chamber-music in the years 2000-2004. In 2008 he won the 2nd prize at violin competition in Shanghai and the 3rd prize at the Hindemith Competition in Berlin.
In 2003 Maximilian Hörmeyer made his solo debut with the Lithuanian Festival Orchestra conducted by Pavel Berman. Since than Maximilian has been working with internationally renowned musicians like Latica Honda-Rosenberg, Maxim Vengerov, Nicolas Chumachenko, Evgueni Sinaiski and Leonid Sorokov.
As orchestra leader and concertmaster Maximilian Hörmeyer performed with the Aspen Festival Orchestra and the Mannheim Philharmoniker, appearing at many important Concert Halls like Auditorio Nacional in Madrid, Gasteig in Munich, Meistersingerhalle Nürnberg and Tonhalle Zurich.