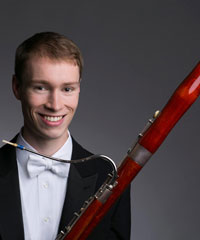 Keith Buncke began his tenure as Principal Bassoon of the Chicago Symphony Orchestra in July 2015, having been appointed to the position by Music Director Riccardo Muti.

Previously, Buncke served as Principal Bassoon of the Atlanta Symphony Orchestra, a post to which he was appointed in 2014, while still attending the Curtis Institute of Music.

Born in Orange, California and a native of Portland, Oregon, Buncke was a pupil of Daniel Matsukawa at Curtis, after studying with Dr. Eric Stomberg at the Interlochen Arts Academy and Mark Eubanks in Portland. He has participated in the summer festivals of Tanglewood, Pacific, Sarasota, and Aspen, and the Music Academy of the West. Just beginning a life of teaching,
he has given master classes at a number of institutions, including the Aspen festival, Northwestern University, University of Kansas, and Roosevelt University.