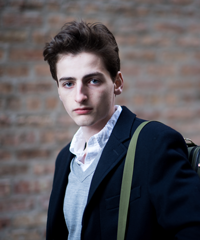 Possessing a rare combination of musical instinct, a unique voice, and flawless technique, Joshua Brown has found success in performances and competitions worldwide. He was first recognized for his debut performance with the Cleveland Orchestra at the age of fifteen, for which he received glowing reviews from critics: “Had he played from behind a curtain, you wouldn’t have believed that Joshua Brown…was only 15,” wrote clevelandclassical.com. “His interpretation of Dmitri Shostakovich’s first violin concerto was so maturely wrought that it might have come from a seasoned professional. Brilliantly played and expertly paced, Brown’s performance checked into every emotional corner of [the] work … Brown was spellbinding throughout his entire time on stage.”

Following that debut, Joshua has gone on to perform regularly with orchestras in the United States and Europe (including the Munich Radio Orchestra, the Chicago Civic Orchestra, ProMusica Chamber Orchestra, Champaign-Urbana Symphony Orchestra, and Rockford Symphony Orchestra, among many others) and has continually garnered praise from critics (Chicago Classical Review: “…his lithe playing betrays a musical maturity beyond his 17 years……the young man played with great poise and a silken tone……and is clearly someone to watch in years to come;” The News-Gazette: “The highlight of the evening was young Joshua Brown’s solo playing in Antonio Vivaldi’s ‘The Four Seasons.’ Brown is clearly a young performer of considerable promise. His sparkling playing in the Vivaldi ..… gave renewed joy to this often heard composition.” The Augsburger-Allgemiene: “With finely cut tone, … [Brown] scored with meticulous articulation, lively dynamics and an understanding of the rhetoric of this music…. Brown … renounced superficial sound enrichment and preferred to rely on narrative statement, even in the large, technically excellently mastered cadenza of the first movement.” Feuilleton Regional: “His brilliant portrayal [in the Tchaikovsky Violin Concerto], with its lyrical colors and virtuoso drive, radiated refinement [and] the Kongress Hall [audience] celebrated with standing ovations.”)

Joshua has performed at concert halls on three continents, including the Kennedy Center in Washington DC, both Carnegie Hall and Merkin Hall in New York City, Severence Hall in Cleveland, Ohio, Symphony Center in Chicago, Arnold Katz State Concert Hall in Novosibirsk, Russia, and Kongress Hall in Augsburg, Germany; has made solo appearances on NPR’s nationally syndicated program From the Top and on WFMT’s Introductions; and has been featured on WFMT, WNIU, WCLV, ElmhurstTV, and Fox5DC. He has also been featured in a number of recitals, including the Dame Myra Hess Memorial Concert Series, the Tchaikovsky Festival in Moscow, and Cincinnati’s Matinée Musicale series.

Joshua’s musical ability has been recognized in competitions as well. At the age of only nineteen, Joshua won the Tenth International Violin Competition of Leopold Mozart in Augsburg, Germany, securing the First Prize, “Mozart” Prize, the Audience Award, the Chairman of the Jury Special Prize, the Kronberg Academy Special Prize, and the CD Production Special Prize. He was also awarded dozens of performance opportunities in Europe which will take place during the next three years.

Other competition victories include the Cooper International Violin Competition (Second Prize and the Audience Award) and the IX International Tchaikovsky Competition for Young Musicians held in Novosibirsk, Russia (the Audience Award, Special Prize, the Academy of Arts Golden Medal, and the Siberian Academy of Arts Talent Award). Joshua was also a top prize winner in the 2016 Stradivarius International Violin Competition; was awarded the Grand Prize for Violin in the 2016 ENKOR International Music Competition; was named the 2016/2017 American Prize Winner for Instrumental Performance; was a National YoungArts Winner in both 2016 and 2017; was awarded Grand Prize in the 2018 National Stillman-Kelly Competition; was named a 2018 Yamaha Young Performing Artist; was awarded the Luminarts Cultural Foundation’s 2019 Luminarts Fellowship for Strings, and was named the National Collegiate Strings Winner for 2019 by the National Federation of Music Clubs. Additionally, as part of Kairos String Quartet, Joshua (who alternated between first violin and viola) won First Prize at the A.N. & Pearl G. Barnett Chamber Music Competition and the Rembrandt Chamber Music Competition and earned Gold Medals in both the Junior Division of the 2018 Fischoff National Chamber Competition and the Junior String Division of the 2018 M-Prize International Chamber Arts Competition, making Kairos the only chamber group ever to win the top prizes at both Fischoff and M-Prize in the same year.

A recipient of the Stradivari Society of Chicago since 2016, Joshua is grateful to play on a 1679 Pietro Guarneri violin from Cremona. Joshua currently studies violin with Donald Weilerstein at New England Conservatory of Music (NEC) on a full Deans Scholarship. For the five years prior to NEC, Joshua studied with Almita and Roland Vamos at the Music Institute of Chicago’s (MIC) Academy as a Scholarship Fellow (recipient of both the Rachel Barton Pine Scholarship and the Alexandra C. and John D. Nichols Fellowship). Other scholarships include the North Shore Chamber Music Festival’s Haag/Galvin Young Artist and Arkady Fomin Scholarship, the American Opera Society of Chicago’s Eleanor Pearce Sherwin Scholarship, the Highland Park Music Club Scholarship, the Parkridge Civic Orchestra’s International Rotary Scholarship, and the 2019 Luminarts Cultural Foundation at the Union League Club of Chicago Classical Strings Fellowship. Joshua is passionate about reaching and connecting with new listeners and towards that end, maintains a very active presence on his Instagram account @joshuabrownviolinist