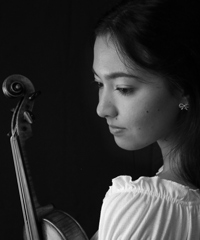 Gina Keiko Friesicke (*2002 in Detmold, Germany) started playing the violin at the age of three and currently studies with Ulrike-Anima Mathé at the Detmold University of Music. Master classes with Ana Chumachenco, Midori, Christoph Poppen, Vadim Gluzman and Frank Peter Zimmermann among others complement her education. Furthermore she was invited to be a master student at the 2019 Verbier Festival Academy where she had lessons with Pamela Frank, Donald Weilerstein and Gábor Takács-Nagy.

Gina is a multiple top prize winner at national and international competitions with numerous special prizes, including the national competition Jugend musiziert (2010-2018) and the 2017 international Telemann competition in Poznan, Poland, the Günter-Henle-Urtextpreis by the Peter Klöckner Foundation and the Sparkassenförderpreis ‘Soloist’ by the state of North RhineWestphalia. In 2017, Gina was the youngest prize winner of the music competition oﬀered by the GWK – Gesellschaft zur Förderung Westfälischer Kulturarbeit e.V. – and was thus accepted into the GWK’s support program, which resulted in further numerous concert opportunities. She got ﬁrst prize at the 2018 Ferdinand Trimborn Competition and was awarded the IMA Award at the 2019 Ishikawa Music Academy in Japan.
In 2021, Gina won the EMCM Junior Career Prize which resulted in becoming a Thomastik Infeld Vienna Junior Artist.

Outstanding concerts over the past years include her debut as soloist at New York’s Carnegie Hall at age 12 with the Orchestra of St. Luke’s and in the same year at Tonhalle Zurich with the Camerata Prague as well as a recital at the WDR Radio House in Cologne and a recital at Bagno Concert Hall in Steinfurt, the oldest concert hall still in use in Europe. In addition, Gina has performed at renowned festivals such as the Verbier Festival and the Schleswig-Holstein Music Festival.

In Germany, she made her debut as soloist in 2014, at the age of twelve with the Leipzig Symphony Orchestra and the Second Violin Concerto by Henry Wieniawski. She since then has been performing regularly as soloist in orchestral accompaniment and has been able to thrill audiences with violin concertos by Max Bruch, Camille Saint-Saëns and Peter Tchaikovsky, among others.

Planned projects for 2021/2002 include a concert with the Dogma Chamber Orchestra and the premiere of a newly written violin concerto by the composer Walter Steffens, both in the UNESCO World Heritage Site Corvey.

Gina plays on a violin by Gianbattista Ceruti, Cremona 1800, which is given to her generously on loan by the Deutsche Stiftung Musikleben in Hamburg.