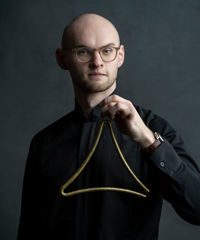 A “tour de force” performer (Seen and Heard International), percussionist Joseph Bricker joins the Cincinnati Symphony and Pops Orchestras as Associate Principal Timpani/Percussion at the start of the 2022-23 season. Prior to joining the CSO, Bricker was the percussion fellow with the Civic Orchestra of Chicago from 2019-2022. In addition to Cincinnati and the Civic Orchestra, he has performed with the Chicago, National, Dallas, Houston, and New World symphonies, the Metropolitan Opera, the Berlin Philharmonic Wind Quintet and several others. In the summers, he has held fellowships with the Verbier, Tanglewood, Pacific (Japan), and Aspen music festivals. He received his Master of Music from DePaul University, studying with Cynthia Yeh, his Bachelor of Music from the Juilliard School studying with Greg Zuber, and previously studied with Patricia Dash.

Joe maintains a deep commitment to community engagement and experimenting with educational models within music. In 2020, he co-founded Chicago, From Scratch, a cost-free program for students of the Chicago Musical Pathways Initiative in which students receive unique instruction in creative musical thinking through the lens of contemporary composition and performance. In 2017, as a Morse Teaching Artist Fellow, he co-created a new band program for New York Public School #191. Since 2020, he has also worked with Notes for Peace, a Chicago-based project that works with families who have lost children to gun violence to create new songs in their memory. In addition to these efforts, Bricker has been engaged as an educator by the Interlochen Arts Academy, Chicago Public Schools, the Aspen Music Festival, the Illinois Music Educators Association, the Juilliard School’s Music Advancement Program, and several others.

An advocate for new and contemporary music, Bricker has worked with composers such as Steve Reich, Tyshawn Sorey, Elizabeth A. Baker, Kevin Day, Silvia Borzelli, Vivian Fung, Fredrick Gifford, and numerous others, including several premieres and recordings. While in his graduate studies, he taught a course on non-standard percussion notation and interpretation at DePaul University, culminating in a digital version of Dai Fujikura’s work Longing from Afar. Joe can also be heard as composer/performer on a 2017 advertisement for TaylorMade-Adidas featuring Tiger Woods. He has been the recipient of awards from the Zildjian Company, the Aspen Music Festival, National Public Radio, and the Skokie Valley Symphony.