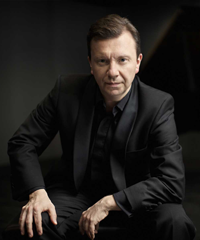 Born into a distinguished musical family in St. Petersburg, Russia, pianist Evgeny Sinaiski has carved a unique niche as one of the most sought after and highly respected chamber music partners and pedagogues in Europe.

Mr. Sinaiski has performed as a soloist with Moscow Philharmonic Orchestra, Latvian State Chamber Orchestra and Bolshoy Theatre Orchestra of Minsk. He appears regularly at most important venues on the continent including Vienna’s Musikverein and Konzerthaus, Concertgebouw in Amsterdam, Tonhalle in Dusseldorf, Laeiszhalle in Hamburg, Herkulessaal in Munich, as well as Brussels’ Palais de Beaux-Arts, Moscow’s Tchaikovsky Hall and Mariinsky Theatre in St. Petersburg. In 2008 he has made a successful debut as producer and pianist at Frankfurt’s Alte Oper and in 2010 appeared for the first time at Salzburg Festival.

Prize winner of international competitions such as ARD in Munich, Shostakovich Competition in Hannover and contests in Netherlands, Latvia and Russia, Mr. Sinaiski’s recordings can be heard on “Gramola” label, as well as on BBC, ORF, Bavarian Radio, and radio stations in Italy, Latvia, Russia and Slovenia among many others.

Dedicated educator, Evgeny Sinaiski is a faculty member and staff pianist of such distinguished master-classes as Salzburg Mozarteum Summer Academy, Bavarian Music Academy, Festival Les Arcs in France and “Villa-Musica” in Germany. In addition,Mr. Sinaiski has assumed the role of official pianist at Wieniawsky and Lipizer International Violin Competitions. Between the years 2002 and 2010 he led the chamber music class at the Rimsky-Korsakov Conservatoire in St. Petersburg, and served as a coach pianist at the UDK Berlin.

Evgeny began his musical education in Riga, Latvia and in 1987 was accepted to the studio of Professor Marina Wolf at the Special Music School Lyceum in St. Petersburg, and subsequently at the St. Petersburg Conservatoire, graduating in 1997. His musical development was also greatly influenced by such prominent musicians as Sofia Wakman, Tamara Fidler and Sergey Uryvaev. Evgeny continued his studies in the Netherlands with Professor Naum Grubert, obtaining Master’s Degree with distinction at the Royal Conservatoire in the Hague in 2003.