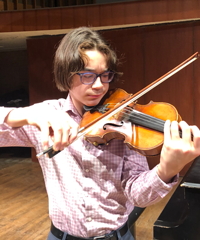 Emrik Revermann is a 14-year-old Canadian-German violinist, based in Toronto. Emrik made his solo orchestral debut at the age of 9 and has since been a soloist with several orchestras including the Orchestre de l’Agora in Montreal, the I Musici de Montreal orchestra, the National Academy Orchestra with Maestro Boris Brott, and the Canadian Sinfonietta. In 2022, Emrik won 1st prize in the Allegra International Competition in Bulgaria. As a result, he performed as a soloist with the Allegra Festival Orchestra in Sofia.

In 2022, he also won 1st prize in the Vienna Classical Music Academy’s international competition. In 2021, Emrik won a Gold Medal in the European Competition for String Instruments in Luxembourg.

In 2019, he won the Vienna International Music Competition, the prize for which was a performance in the Musikverein concert hall in Vienna.

Klassik magazine in Austria said his performance “showed considerable, already highly-developed potential.” In 2018, just after his 10th birthday, he was named “Absolute Laureate” of the Kocian International Violin Competition in the Czech Republic, after coming in 1st place in his age category.

Emrik was subsequently invited back to the Czech Republic to perform the Mendelssohn violin concerto with the Czech Chamber Philharmonic Orchestra Pardubice as well as do a recording for Czech Radio in Prague. Emrik was named in 2018 by the Canadian Broadcasting Corporation as one of “30 Hot Canadian Classical Musicians Under 30,” the youngest person on the list. He received the top violin score at the national Canadian Music Competition in 2016 and 2017 – in 2017, he was named a grand prize winner. In 2020 and 2021, Emrik took masterclasses with Karen Gomyo, Mark Kaplan, Ian Swensen, and Giora Schmidt through Orford Musique. During the pandemic, he has also had the opportunity to study virtually with British soloist Tasmin Little. In 2019, Emrik took masterclasses with Donald Weilerstein at the Schleswig-Holstein Music Festival in Germany. From 2016-18, Emrik took masterclasses with several distinguished violinists at the Summer Academy at the Mozarteum University in Salzburg. Emrik is currently a full-scholarship student at the Royal Conservatory of Music in Toronto, where he studies with Timothy Ying. Fluent in German, Emrik’s passions outside the violin are history, politics, composing, playing tennis, soccer and basketball. He plays on a ca.1824 Nicolas Lupot violin on generous loan from Canimex Inc., from Drummondville, Quebec.