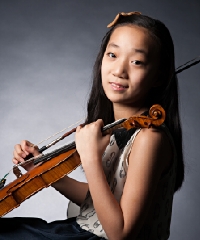 Elli Choi, 13, was born in San Diego and began her violin studies at age three. She made her debut as a soloist at age five with the Korean Symphony Orchestra in Seoul and by the time she was nine had performed Mendelssohn’s Violin Concerto with the Youth Symphony Orchestra of Premier Music College in Prague, and been on tour with the Prague Youth Philharmonic Orchestra performing Paganini’s Violin Concerto No. 1, Lalo’s Symphonie Espagnole and Sarasate’s Carmen Fantasy.

Recently, Ms. Choi performed the Tchaikovsky Violin Concerto and Beethoven’s Triple Concert with Eastern European Youth Symphony at the 2014 Peace Music Festival in Dubai and Abu Dhabi. She was a soloist at the 2014 Interlaken Classics festival in Switzerland where she performed and recorded the Wieniawski Concerto No. 1 with the Interlaken Festival Orchestra. Also in 2014, Choi made her second appearance at the “Juilliard in Aiken” Festival in South Carolina with the Juilliard Orchestra.

She has appeared as soloist with the Corpus Christi Symphony in Texas, with the Sejong Soloists in Seoul, Korea, with the Orchestra Musica Nova in Scottsdale, Arizona, and with Ensemble 212 in New York City. She performed Bach’s Double Concerto at Philadelphia’s Mann Center with members of the Philadelphia Orchestra and has appeared twice as a soloist with the Ocean City (New Jersey) Pops Orchestra. In 2012, Ellie had the honor of performing for Ban Ki-Moon, Secretary-General of the United Nations.

This season, Ms. Choi will perform at the Trans-Siberian Art Festival in Novosibirsk, Russia and at the Berlin Philharmonie with the Zakhar Bron Chamber Orchestra. In July she will give a recital at the Tonhalle, Zurich Switzerland.

Choi has appeared at Avery Fisher Hall, the David H. Koch Theater, and the Peter Jay Sharp Theater at Lincoln Center in New York, Verizon Hall at the Kimmel Center in Philadelphia, in Dvorak Hall at the Rudolfinum Prague, at the Raum in Seoul, the Mozarteum in Salzburg, Austria, the San Diego Civic Theater, and for the Stradivari Society in Chicago.

At age 13, Ellie Choi is the youngest recipient of an instrument from the Stradivari Society in Chicago and performs on a three-quarter sized violin by made Joseph Rocca of Turin in 1852.  Since 2013, she has been an artist under the management of Interlaken-Classics, Switzerland.