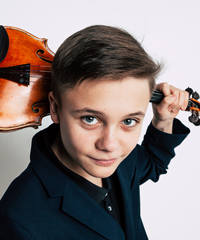 Daniil Bulayev, 14 years old is currently studying with Nelli Sarkisyan at the Emil Darzin Music School in Riga and with Petru Munteanu in Germany.

Daniil made his first debut as a soloist with the Chamber Orchestra in the Concert Hall AVE SOL in Riga (Latvia) at the age of five. Two years later, when he performed with the Symphony Orchestra in Russia. At the age of 8 Daniil gave his first recital at the Central Music School (College) of the  Moscow P.I.Tchaikovsky Conservatory Concert Hall. Since 2013 he annually gives his violin recitals.

Daniil was invited to record some performances in professional studios Latvian Radio 3-Klasika, which was broadcasted. It was project «Promotion of youth involvement in professional classical music performance». On July 6, 2014 Daniil had the honor to perform at the concert “Born in Riga” with the Chamber Orchestra “Kremerata Baltica” (headed by Gidon Kremer).

In January 2018 Daniil had the honor to give his recital in Cremona (Italy). In 2018 he performed in the concert tour with the Liepāja Symphony Orchestra, the conductor Gintaras Rinkevičius. In July 2018 Daniil had the honor to perform at the concert “Born in Latvia” dedicated to Latvia’s Centenary.In October 2018 he performed his recital at the Latvian National Opera.