An extraordinary pedagogue, Professor of the Royal College of Music in London, and Music Director of the Keshet Eilon Violin Mastercourse in Israel, violinist Itzhak Rashkovsky is one of today’s leading and most sought-after teachers.

An extraordinary pedagogue, Professor of the Royal College of Music in London, and Music Director of the Keshet Eilon Violin Mastercourse in Israel, violinist Itzhak Rashkovsky is one of today’s leading and most sought-after teachers. His students, who come from all over the world to study with him, have been winners of many national and international competitions. We are very happy to have Professor Rashkovsky lead our Master’s Workshop – masterclass where he will share his experience and knowledge with the younger generation of musicians. 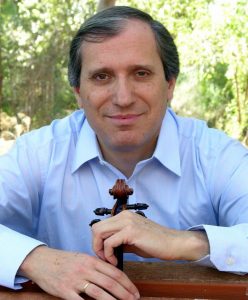 internationally renowned Russian-Israeli violinist and pedagogue. Was awarded a Master’s Degree by the Samuel Rubin Israeli Academy of Music, Tel Aviv, where he studied with Professor Yair Kless. He has appeared as a soloist and chamber music player in many countries. As Professor of Violin at the Royal College of Music, London, Itzhak Rashkovsky has come to be one of the leading and most sought-after teachers in the UK. His students, who come from all over the world to study with him, have been winners of many national and international competitions. He has given mastercalsses worldwide and has been juror of numerous international competitions, notably Vice chairman of the jury of the 12th Henryk Wieniawski, Poland and Sion Valais, Switzerland, Hannover, Germany, Lipizer, Italy and Yampolsky, Russia International Violin Competitions. One of the founders and Music Director of Keshet Eilon Violin Mastercourse, Israel, an international summer programme for exceptionally talented young violinists, located in Kibbutz Eilon, as well as Artistic Director of the London Music Masters. His articles and editions of violin pieces were published by “The Strad” magazine. In 1998, in recognition of his outstanding services to music, Itzhak Rashkovsky was awarded by The Prince of Wales a Fellowship of the Royal College of Music. He plays the 1831 J.F. Pressenda violin through the generous loan from the Elderberry Foundation. 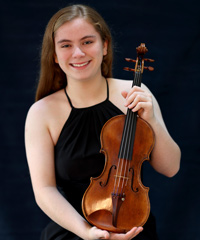 Lily began studying violin at the age of four at the Oklahoma City University Children’s Performing Arts Program with Karén Khanagov. She made her fist solo orchestral debut at the age of seven, playing with the Academy Sinfonia Children’s Performing Arts Orchestra. At nine, Lily won the Sanford-Austin Memoriam Award by the Oklahoma City Philharmonic’s Orchestra League, and went on to win the First Prize, and Overall awards in the same competition.

Lily was honored to be chosen as a laureate of the American Music Institute’s 2020 Violin Competition. She was chosen as First Alternate in the 2020 MTNA Competition of Indiana, and was awarded the Finalist Award of Excellence in the 2020 Indianapolis Symphony Orchestra Maurer Young Musicians Contest. In 2021, she was selected as the statewide Junior Division winner of the MTNA Competition. Lily was awarded Honorable Mention in the 2020 Association of the Louisville Orchestra Young Artist Competition, and was a Young Laureate of the 2021 Chicago International Violin Competition. In 2021, Lily won the First Prize (tie) in the Ann Arbor Symphony Orchestra Young Artist Competition, and will perform with the Ann Arbor Symphony in November of 2022. She was also awarded the Ladonna Dingledine First Prize of the 2021 Muncie Symphony Orchestra Young Artists Competition, and the First Prize in Age Group C of the 2020 Bellegrande International Music Competition. Chamber music accolades include the First Place and Grand Award in the Barnett Chamber Music Competition, and performances for Julio Elizalde, as well as the Cavani and Borromeo Quartets.
She has attended festivals and summer programs at the University of Oklahoma, Indiana University’s Jacobs School of Music, the Texas Strings Festival, and the Heifetz International Music Institute. She has performed in masterclasses for Sergey Malov, Hal Grossman, David Taylor, Danielle Belen, Mauricio Fuks, Vadim Gluzman, Mihaela Martin, Eszter Haffner, and Ilya Kaler. 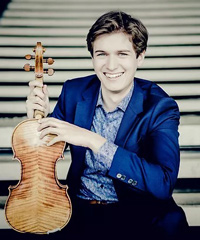 Julian Walder, honored with a lot of national and international first prizes, won 1st Prize at the NYIAA – “New York International Artists Association” violin competition with half an hour Carnegie Weill Recital Hall appearance in New York in October 2018. In September 2019 he got the “Golden Medal with high distinction” at 3rd Berliner International Competition – Strings. Julian Walder is Grand Prix and 1st Prize winner of the Grumiaux Competition in Belgium. He is also a laureate of the Wieniawski-Lipinski Competition in Poland and got a special prize in the Tchaikovsky Competition for Young Musicians in Novosibirsk/Russia as well as high donated prizes from Rotary Vienna for supporting his talent and art.
In 2021 he won first prizes in France Music Competition and Clara Schumann Competition which were hold online. Julian is a multiple 1st prize winner with maximum of points at “Prima la Musica” in Austria and winner of Musica Juventutis giving a recital at Vienna Konzerthaus. He was invited to give a “Start up!” concert by Jeunesse in the Vienna Musikverein in 2018.Julian performed outside Austria in the USA, Russia, Czech Republic, Poland, Switzerland, Belgium, Germany and Italy.
In January 2020 Julian went on tour as a soloist with the Chelyabinsk Symphony Orchestra and received standing ovations every time for his Brahms violin concerto, e.g. in the sold out Philharmony Chelyabinsk. In the same year he got a sponsorship from the Recording Label “Orpheus Classical” – the digital album “Tchaikovsky Violin Concerto” went online on the major streaming platforms worldwide and in 2021 he released his second album as an artist of the Spanish Recording Label KNS Classical with his one hour CD “Faust”.
Julian Walder was born in Vienna on 19th of October 2000. Influential teachers for Julian were Yair Kless and Arkadij Winokurow. Since 2019 he continues his studies with Natalia Prishepenko at Carl Maria von Weber University in Dresden.
He attended masterclasses e.g. with Vadim Gluzman, Daniel Hope, Liana Isakadze, Zakhar Bron, Shmuel Ashkenasi andTanja Becker-Bender.