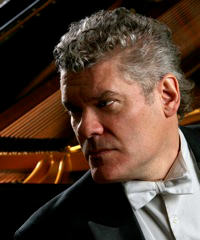 Wolfram has appeared with many of the greatest orchestras of the world and has developed a special reputation as the rare concerto soloist who is also equally versatile and adept as a recitalist, accompanist and chamber musician. In all of these genres, he is highly sought after for his special focus on the music of Franz Liszt and Beethoven and is a special champion for the music of modernist 20th century American composers.

An enthusiastic supporter of new music, he has collaborated with and performed music by composers such as Aaron Jay Kernis, Kenneth Frazelle, Marc Andre Dalbavie, Kenji Bunch, and Paul Chihara. His world premiere performance of the Chihara re-orchestration of Chopin’s Piano Concerto No. 1, with the Milwaukee Symphony under the baton of Andreas Delfs, was met with great critical attention and acclaim.

Other highlights include several chamber music collaborations, including recitals and recordings with Oscar Shumsky, recitals with Harvey Shapiro and numerous collaborations with Leonard Rose.  He also performed Richard Strauss’s setting of the Tennyson poem Enoch Arden with the Oscar-winning actress Louise Rainer, and with actor Jeff Steitzer.

Wolfram has extensive experience in the recording studio. He has recorded four titles on the Naxos label in his series of Franz Liszt Opera Transcriptions and two other chamber music titles for Naxos with violinist Philippe Quint (music of Miklos Rosza and John Corigliano). Also for Naxos he has recorded the music of Earl Kim with piano and orchestra – the RTE National Symphony Orchestra of Ireland behind him. For the Albany label, he recorded the piano concertos of Edward Collins with Marin Alsop and the Royal Scottish National Orchestra.  He most recently recorded the Bach Goldberg Variations on the PlayClassics label.

As educator and teacher, Mr. Wolfram is a long-standing member of the piano faculty of the Eastern Music Festival in North Carolina, and a regular featured guest at the Colorado College Music Festival in Colorado Springs, Colorado. He also teaches a performance class and a chamber music class at the acclaimed Manhattan School of Music.

A graduate of the Juilliard School, William Wolfram resides in New York City with his wife and two daughters and is a Yamaha artist.