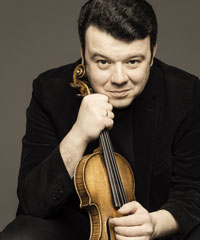 Universally recognized among today’s top performing artists, Vadim Gluzman brings to life the glorious violinistic tradition of the 19th and 20th centuries. Gluzman’s wide repertoire embraces new music and his performances are heard around the world through live broadcasts and a striking catalogue of award-winning recordings exclusively for the BIS label.

Highlights of the current season include performances with the Chicago Symphony, Cleveland Orchestra, Sydney and Melbourne Symphonies, Tokyo’s NHK Symphony Orchestra, and the ProMusica Chamber Orchestra in Ohio, where he leads performances as its Creative Partner and Principal Guest Artist. He celebrates the 100th anniversary of the birth of violinist Henryk Szeryng with the Deutsche Radio Philharmonie, Hamburg NDR Elbphilharmonie Orchestra, Jerusalem Symphony and the Warsaw Philharmonic.

Gluzman serves as Distinguished Artist in Residence at the Peabody Conservatory and performs on the legendary 1690 ‘ex-Leopold Auer’ Stradivari, on extended loan to him through the generosity of the Stradivari Society of Chicago.