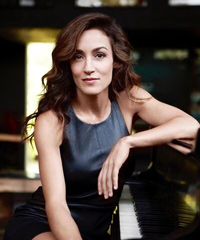 Multi-Grammy nominated artist, Marta Aznavoorian, has performed to critical acclaim throughout the world as orchestral soloist, recitalist, chamber musician and educator. A Chicago native, she has performed in her hometowns most prestigious venues and tours extensively throughout the world. She made her professional debut at the age of 13 performing Mozart Piano Concerto No 24 in C minor K.491 with the Chicago Symphony Orchestra at Symphony Center in four concerts of their series. She has won over audiences appearing as soloist with orchestras internationally including the Sydney Symphony Orchestra, the Sydney Conservatory Orchestra, San Angelo Symphony, San Diego Symphony, and the New World Symphony which resulted from a personal invitation from Michael Tilson Thomas who also was her conductor.

Aznavoorian has worked with such renowned conductors such as the Late Sir George Solti, Michael Tilson Thomas, Lukas Foss, Henry Mazer, Francesco Milioto, Kirk Muspratt among others. She has won numerous awards, including first prize at the Stravinsky in the Stravinsky International Competition where she was also lauded the special prize for best interpretation for the commissioned contemporary work. As a recipient of the 1990 Level 1 award in the National Foundation for the Arts Recognition and Talent search, Ms. Aznavoorian became a Presidential Scholar and was invited to the White House where she met former President George W. Bush and performed as soloist at the Kennedy Center in Washington, D.C.

Ms. Aznavoorian is founding member of the Lincoln Trio which Fanfare Magazine has labeled as “one of the hottest young trios in the business”. The Grammy Nominated trio tours regularly throughout the world and just celebrated their most recent CD release from Cedille Records called Trios from our Homelands which was also nominated for a Grammy in the best small ensemble/chamber music performance in 2017.

In strong demand as a chamber musician, Ms. Aznavoorian has worked with many artists all over the world and has frequented many festivals including Tanglewood Festival, Aspen Music Festival, Caramoor Festival, Hornby Island, Green Lake Festival and she will be making her 9th straight season appearance at the Ravinia Festival in 2017.

A champion and lover of new music, Ms. Aznavoorian has worked with the worlds leading composers including William Bolcom, Osvaldo Golijov, Jennifer Higdon, Shulamit Ran, Augusta Read Thomas, Joan Tower, Lera Auerbach, Pierre Jalbert, Stacy Garrop, Laura Schewendinger, and continues to collaborate with several of the most innovative composers of our time. In 2017 she was awarded the “Standing Ovation Alumni Legend Award” for her outstanding outreach, performance and teaching mentoring to her hometown community in Chicago.

A student of the renowned teacher Menahem Pressler, Aznavoorian received her Bachelor degree and Artist Diploma at Indiana University and her Masters Degree from New England Conservatory where she studied with the late Patricia Zander. A passionate teacher and educator, Aznavoorian has taught and given masterclasses at Universities throughout the United States and abroad, and is on faculty at the Music Institute of Chicago, and Piano and Chamber Music faculty at DePaul University School of Music. Aznavoorian records for Naxos, ARTEC label, Cedille Records and has just recently released Violin and Piano arrangements of the Music of Charlie Chaplin under the Warner Classics and Erato label with violinists Philippe Quint and Joshua Bell.

Marta Aznavoorian is a Steinway Artist.