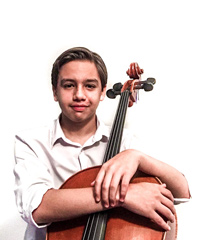 At age 11 cellist Marlon Elliat Florez Dovales was described as ‘the new promise of the cello” by VenezuelanSymphonica. Born in Caracas, Venezuela in 2003 Marlon began his musical studies at the age of 3 years at the Montalbán Children’s Orchestras System of Venezuela world renowned as “El Sistema”.

Since 2015 Marlon has studied under the tutelage of Joseph Kuipers in Dallas. His previous teachers include Valmore Nieves and Juana Díaz, and in masterclass Natalia Gutman, Alisa Weilerstein, and Paul Desenne.

In 2012 he won the 1st place in the National Competition of Venezuelan Cellists, and in 2017 he received 2nd prize in the Collin County Concerto Competition.

Over the course of his studies in “El Sisteme” in Montalbán he was one consistently of the youngest members of the orchestra. In 2013 he joined the National Children’s Symphony Orchestra of Venezuela as principal cello, and in 2015 he was appointed first chair of the orchestra, touring seven countries with the orchestra. In fall 2017 he will join the Greater Dallas Youth Orchestra.

He has appeared as soloist with the Youth Orchestra of Caracas under the baton of the famed conductor of the LA Philharmonic Gustavo Dudamel, and under Dietrich Paredes in the Center for Social Action for Music.

He plays a cello from Wayne Burak.