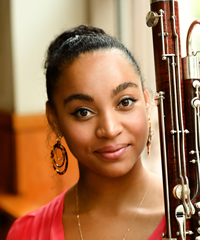 “My goal as a musician and artist is to encourage emotional expression through music, promote diversity, acceptance and sense of belonging in diverse communities.”

Born in Moscow, Marlene moved to Canada at the age of 10 and began learning the bassoon three years later. She quickly developed a deep passion for the instrument and was accepted at the Montreal Conservatory of Music where she studied with Mathieu Harel and Stephane Levesque. She completed her undergraduate diploma in Montreal and her post-bachelor at the Curtis Institute of music with Daniel Matsukawa.

Winner of the first prize in the Canadian Music Competition (2012)and finalist of the Meg Quigley bassoon competition (2015), she performed with the Edmonton Symphony orchestra, the Montreal Metropolitain symphony orchestra, the Montreal Conservatory orchestra and the Youth orchestra of Montreal. She was invited to perform as guest principal bassoon with the Saint-Paul chamber Orchestra and is frequently performing with the Jupiter Chamber Players in New-York.

In February 2014, Marlene gave a recital at the Red Path Hall at McGill University as part of the Montreal High Lights Festival. The performance was recorded and broadcasted on CBC radio2.

One of the eight laureates of the Developing Artist Grant of the Hnatyshyn Foundation (2013), Marlene is living in Philadelphia and is freelancing with both Canadian and American orchestras.

She is also part of a community teaching artist program, working along with Penn memory center, where she is leading a “creativity through music” class for people with diverse stages of Alzheimer’s disease.