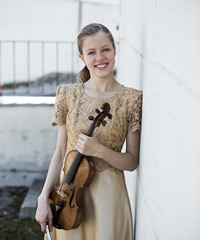 Lara Boschkor was born in Tübingen in 1999 and began playing the violin at the age of four. She is currently studying as a junior student at the Frankfurt University of Music and Performing Arts in Erik Schumann’s class.

She plays a violin by Carlo Antonio Testore made in Milan in 1740, which is on loan to her by the Deutsche Stiftung Musikleben.

In 2013 and 2017 Lara Boschkor was an active participant in Kronberg Academy’s Violin Masterclasses with Ana Chumachenco and 2015 with Donald Weilerstein, where she was awarded the Prince of Hesse Prize in 2015 and the Ana Chumachenco Prize in 2017. In the year 2017 she participated in the Kronberg Academy Festival. Since October 2015 she has been studying with Erik Schumann at Kronberg Academy’s Precollege programme, which is run in cooperation with the Frankfurt University of Music and Performing Arts. Her studies are funded by the Yehudi Menuhin-Stipendium.