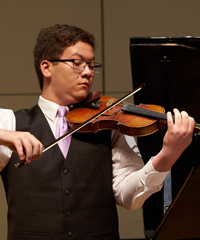 Kevin Chan was born into a musical family and began studying violin at the age of 3. A few years later, he began traveling with his mother to bring music to hospitals and assisted-living facilities, and he continues to enjoy performing throughout the community with Strings from the Heart, a group of volunteer high-school string musicians. His musical outreach work has resulted in multiple scholarship awards from Music Doing Good, a Houston arts-education organization.

Chan currently studies violin at Rice University’s Michael P. Hammond Preparatory Program, where the 16-year-old is a student of Lisa Shihoten. He attended Brevard Music Center’s summer institute in 2017 and was selected to be the concertmaster for the closing orchestra concert. As a junior at Clear Lake High School, Chan is concertmaster of the school’s nationally acclaimed chamber orchestra. After winning the Clear Lake Concerto Competition in 2016, he made his solo debut with the Clear Lake Symphony. He is also concertmaster of the Houston Youth Symphony.

As a Boy Scout, Chan organized a concert benefitting the Houston Food Bank for his Eagle Scout project. He has also organized work groups from his church and school to help clean homes that were flooded by Hurricane Harvey. His interest in computer science led him to design and build his own computer.