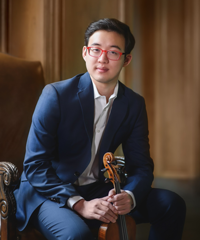 Julian Rhee is quickly gaining recognition as an emerging artist and performer, praised for his “sophisticated, assured tone, superb intonation, and the kind of poise and showmanship that thrills audiences.” (The Strad)

An avid soloist, Julian made his Milwaukee Symphony Orchestra debut at age 8, and has gone on to perform with orchestras including the Aspen Philharmonic, Wisconsin Philharmonic, San Jose Chamber, Avanti, San Diego, Pittsburgh, Eugene, and Madison Symphony Orchestras. He has performed in an array of venues including Ravinia’s Bennett Gordon Hall, Heinz Hall, the Overture Center for the Arts, Teatro El Círculo in Rosario, Argentina, The Musikverein in Vienna, Bartok Hall in Hungary, New World Center, and the John F Kennedy Center.

Julian studied with Almita Vamos and Hye-Sun Lee at the Music Institute of Chicago Academy. He is currently pursuing a Bachelor of Music degree with Miriam Fried at the New England Conservatory.