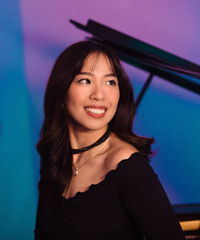 Indonesian pianist Janice Carissa has been praised for radiating “the multicolored highlights of a mature pianist” (Philadelphia Inquirer) and having a “fleet-fingered touch that is particularly impressive,” as well as for her artistry that “conveys a vivid story rather than a mere showpiece” (Chicago Classical Review). Recently named a Gilmore Young Artist and winner of Salon de Virtuosi, she has also won prizes at Aspen Music Festival’s Concerto Competition, American Protégé Star Performer Award, Indonesia Pusaka Competition and IBLA Foundation’s Piano Competition.

Deeply devoted to chamber music, Janice has appeared at Ravinia and toured with Miriam Fried and Musicians of Ravinia, on the Evnin Rising Series at Caramoor, and at the Marlboro, Kneisel Hall, Oxford, and North Shore festivals, performing with artists such as Vadim Gluzman, Marcy Rosen, Paul Neubauer, Pamela Frank, Lucy Shelton, Sally Chisholm, Peter Wiley, David Shifrin and players of Berlin Philharmonic Scharoun Ensemble. She is an active member of Ensemble 132 and Curtis 20/21 Ensemble. She has also been featured on WHYY TV Philadelphia, WRTI, WQXR, PBS, and NPR’s From The Top.

Born in Surabaya, Janice first studied with her self-taught pianist mother at age 5. Janice is presently in her final year at Curtis as a Gerry and Marguerite Lenfest fellow. She has studied under the tutelage of Gary Graffman and Robert McDonald since age 15.