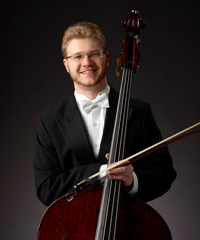 Derek Zadinsky won the audition to join The Cleveland Orchestra’s bass section in January of 2012. Previously, Derek served as Principal Bass with Symphony in C (formerly the Haddonfield Symphony) in Camden, New Jersey. He has also performed as a substitute musician with the Chicago Symphony Orchestra, Seattle Symphony, and the New World Symphony in Miami. In 2011, Derek won first place in the International Society of Bassists Orchestral Competition in San Francisco, where the prize was a paid week of work with the San Francisco Symphony.

Derek started teaching at Cleveland State University in the fall of 2012, the Cleveland Institute of Music in the fall of 2013, and the Oberlin Conservatory in the fall of 2014. In 2015, he taught a masterclass at the Colburn School in Los Angeles. During the summers, he has taught and performed at Oberlin with the Francois Rabbath Workshop in 2015 and the Milt Hinton Institute for Studio Bass in 2016. He also teaches privately and online through Skype. In 2014, he published an edition of J.S. Bach’s Cello Suite No. 5, which is available on iBooks for iPhones, iPads, and Mac computers.

As a soloist, Derek has performed with the Seattle Symphony, the American Academy of Conducting at Aspen Orchestra and twice in Carnegie Hall’s Stern Auditorium with string orchestra. Those performances included Giovanni Bottesini’s Concerto No. 2 and his own arrangement of Pablo de Sarasate’s Zigeunerweisen.

A native of Issaquah, Washington, Derek earned a Bachelor of Music degree from the Curtis Institute of Music in Philadelphia, where he studied with soloist Edgar Meyer and Harold Robinson, the Principal Bass of the Philadelphia Orchestra. He continued his studies with Edgar Meyer at the Aspen Music Festival and School during the summers of 2007-2009. Prior to his studies at Curtis, he studied privately for four years with Jordan Anderson, the Principal Bass of the Seattle Symphony.

Derek’s instruments are an English bass attributed to the workshop of Thomas Dodd in London, circa 1790 and a custom five string model made by Paul Hart of Salt Lake City, Utah in 2014. He plays on an early 20th century bow attributed to Andre Vigneron from the Parisian workshop of Corvisier, and more modern bows by Keith Peck and Reid Hudson.

Outside of music, Derek enjoys spending time with his wife, Elizabeth, and his Yorkie puppy, Lila. His hobbies include playing Xbox games with friends and family, automobiles, and watching his hometown’s Seattle Seahawks football games.