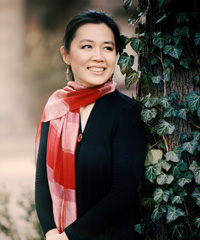 Praised by the Washington Post as a “jaw-dropping pianist who steals the show…with effortless finesse,” pianist Amy Yang has collaborated with Patricia Kopatchinskaya, Richard Goode, Ida Kavafian, Roberto Díaz; members of Guarneri String Quartet and the Mahler Chamber Orchestra; and the Dover, Jasper, and Aizuri string quartets. An advocate for new music, Ms.Yang has premiered music by Caroline Shaw, Avner Dorman, Michael Hersch, Ezra Laderman, and her father, composer Hua Yang. She has appeared in such venues as the Marlboro, Ravinia, Aldeburgh, and Ojai music festivals; Verbier Academy; Cal Performances; and Chamber Music Northwest. She has recorded four CDs for release in 2018, including a debut solo disc, a recording with violinist Tessa Lark, a recording of Ben-Haim’s music with violinist Itamar Zorman, and a recording of solo works by Ezra Laderman. Ms. Yang is a graduate of the Curtis Institute of Music, the Juilliard School, and the Yale School of Music. She joined Curtis faculty in 2011 and currently is the program director and a member of the piano faculty of the Curtis Summerfest Young Artist Summer Program.